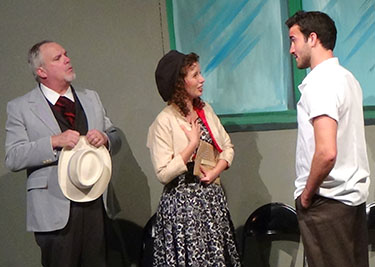 When people ask me what Trees Die Standing Tall is about, I have trouble answering that question. It’s a farce with a little mystery, quite a bit of intrigue, wonderful characters and a lot of love. Love really drives this play. When I read it, I certainly fell in love with it.

Alejandro Casona is an extremely well know Spanish playwright, but unlike many of his European contemporaries, never became well know here. In reading this play I thought a lot of Pirandello and Molnar – two favorites of mine. Lia Beeson, who translated many of his plays, wrote that Casona believed theatre could cause people to think of a better world and improve their lives. I also believe that to be true, and in this beautiful comedy, Casona really puts that belief on stage.

As we began working on this play one of my first dilemma’s was where to set this charming farce. The play was written in 1947 when Casona was living in Buenos Aries, having fled Spain during the Spanish Civil War. I was looking for a place that this English translation could hold onto its Spanish roots. We settled in Cuba for many reasons; the visual opportunities it offers, that English could be a primary language, and very importantly – the jacaranda tree grows there. It is the literal tree referenced in the title. 1948 was a high time for Cuba, and the talented Bluff City production team have been having a great time bringing it to the stage.

As we have been rehearsing we keep finding more depth to the play and the characters. Casona is just the kind of playwright I like to work on. There is so much to work within the text, but having directed and acted himself, he writes leaving much open for a company to interpret. I am fortunate to have extremely talented actors who are enjoying delving deeply into these characters.

As I said in the beginning, I find this play to be primarily about love – an old deep love starts this adventure going and leads us to fresh new loves. It is also about family (my personal theme this season at Bluff City), what we do for them, to them and even how we choose them. All of this leads us to Bluff City’s theme this season: Faith…What we hold in the absence of proof. Although in this instance will the proof challenge faith to a breaking point?