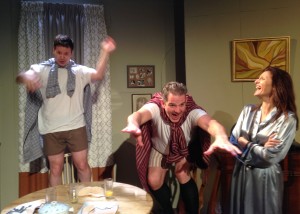 Set from 1944 to 1993 in a New Jersey suburb, this play chronicles the life of the Murdoch family as they develop alongside the turmoil of American history. As America undergoes the civil rights movement, Vietnam, the assassination of the Kennedy’s and Martin Luther King Jr., and the take off of pop culture with sex, drugs and rock n’ roll, the Murdoch’s undergo their own brewing instability.

“Costumes, lighting and sound assist the story as it moves through the decades and under the tight direction of Sydnie Grosberg Ronga reaches a cryptic conclusion.” – Wendy Coyle · NYTheater Now